Woman caught allegedly almost four times the legal limit - A women has had her licence suspended after being caught allegedly drink driving in Cannonvale. Police say they were patrolling the area when t ...
IKEA fined for spying on French employees - A French court has ordered IKEA to pay a one million euro ($A1.6 million) fine for spying on its French staff after the world's biggest furniture reta ...
Motoring body welcomes budget boost for Mackay roads - A multi-billion dollar budget investment in roads has left the state's peak motoring body cheering. RACQ is welcoming the government's $27.5 billio ...
Australia and UK finalise free trade deal - Scott Morrison has hailed a free trade deal with the United Kingdom as the most comprehensive and ambitious in Australia's history.
NRL investigating Radley flight removal - Victor Radley could be in hot water with the NRL again with the integrity unit investigating why he was kicked off a flight on the Gold Coast.
Telstra blocks 13 million spam calls - Telstra has doubled the number of spam calls it blocks in just four months, with its monthly tally now averaging around 13 million blocked calls.
Qld govt eyes budget surplus as debt grows - Queensland is aiming to return to surplus as the state government uses a new accounting method to cut debt forecasts.
Roads closed as motorhome catches fire in West Mackay - A motorhome has gone up in flames in West Mackay, causing black smoke to blanket the city. Three firefighter crews were called to Webberly Street a ...
Roads, hospitals and housing top state budget wish list - Mackay leaders are hoping for significant investment into housing and road infrastructure when the State Government reveals its budget today. The T ...
We could have done better: swimming boss - Swimming Australia's boss says the organisation "could have done better" in handling sexism complaints while admitting deep concern at the t ... As Paul Stanley bravely recounted the tragic death of his son to a room of strangers in Mackay, not an eye was dry.

Matthew Stanley was just 15-years-old when he was savagely beaten and killed by another teenager, at a birthday party in Brisbane, in 2006.

Now, Paul is dedicating his life to reducing the rising rate of assault crimes in Mackay.

Crime has risen by 44 per cent in Mackay over the past decade and there has been the same increase in assault offences.

Local teachers, councillors, police officers, liquor industry workers and health officials have brainstormed at a forum today, united in efforts to come up with a community-led approach to solving the problem.

Paul was the first to speak.

"Can I ask everyone to close their eyes and think of the most important person in your life," he asked the crowd.

In a powerful silence, everyone did as they were asked.

"Think about the last time you saw them, what were you talking about?

"Imagine if you never get to see them again." 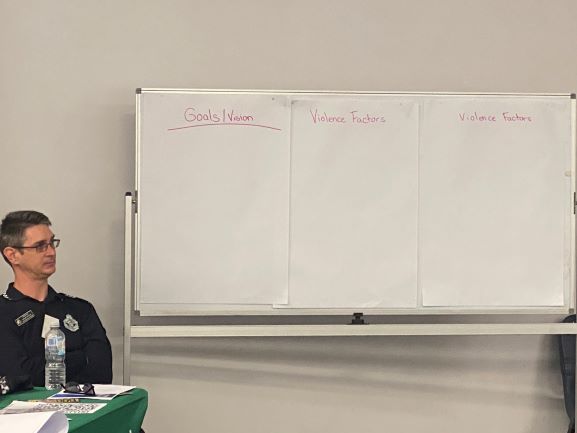 Superintendent Glenn Morris says crime is a complex issue that has devastating impacts on all corners of the community.

"We are seeing different offending types of behaviours across different areas, and I guess today gives us the opportunity to bring people together from different aspects ... we can then try and deal with the different nuisances that are causing offending behaviour," Superintendent Morris says.

She recently visited Roma, in outback Queensland, where they have set up a 'youth hub' aimed at curbing an increase in violence.

"One of the fantastic things about starting this conversation is that it builds the ground swell for multi-stakeholder change, and that turns to be the most supported and evidence-based strategy.

"There's lots of programs that can work, there's lots of strategies that can be used, but really this kind of collection of important and thoughtful people is going to make that difference."

Representatives from each sector have been tasked with coming up with ideas on how to help create change ahead of the next forum.

They will meet again later this year.